How Did We Get Here?

In the classic Sociology book ‘Bowling Alone’, Robert Putnam makes the compelling argument that social capital (reciprocal connections among people) has been in a steady decline ever since its peak in 1964.

By the year 2000, the average American was 58 percent less likely to attend a club meeting than an individual only 25 years earlier. This may not seem like much of a big deal until you realise that regularly participating in a social group halves your risk of dying in the next 12 months.

It’s not just the joining of groups that has changed either. We are 45% less likely to invite friends around to our place, and 33% less likely to have a dinner around the table with the whole family. We are also 40% less likely to join a bowling league, which is surprisingly the number one participation sport in the U.S. (Putnam, 2000).

This overall decline in social capital has also resulted in a loss of mutual trust. From 1966 to 1998, the proportion of Americans who endorsed trusting the federal government “only some of the time” or “almost never” rose from 30% to 75%. Without this trust in others, we no longer know who to turn to for help and support when needed.

Putnam believed that some of the main culprits for the loss of social capital were:

How Much Time do People Spend on Technology?

In the 2013 documentary ‘The Mask You Live In’, some pretty scary statistics are presented about how much technology is consumed by male children and teenagers. In the U.S., the average boy:

The Potential Consequences of Excessive Technology Use

Although some people write off TV, video games and the internet as harmless forms of entertainment that help to keep kids safe, out of trouble and off the streets, they do come with their own risks and potential consequences. The following data was also presented in ‘The Mask You Live In’ documentary:

BUT if this was the case, WHY do we have a multi-billion dollar advertising industry?

IF media images don’t have an effect on people’s subsequent behaviour, WHY would commercials and product placement even exist?

WHY would companies be happy to pay millions for 30-second Super Bowl commercials?

It is ONLY BECAUSE the COMPANIES paying for the commercials and the MARKETERS producing the commercials HAVE EVIDENCE that what we see does have an impact on our beliefs and behaviours!

If a 30-second commercial can change our attitude or behaviours towards something, why won’t witnessing 200,000 acts of violence before the age of 18?

WHO IS REALLY BEING FOOLED? The general public, or the multi-billion dollar corporations, industries and governments?

The Problem of Smart Phones and Digital Streaming

Since 2013, the problem of technology has only gotten worse, and it is now eating into even more of our leisure time, as shown in this clear depiction by Adam Alter in his 2017 TED talk: 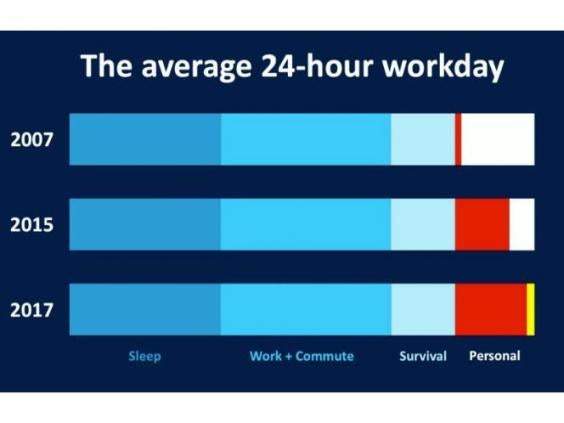 The New York University psychologist presented data from the Bureau of Labor Statistics to show that sleep, working, commuting and activities of daily living (cleaning, showering, eating etc.) have all taken up a similar amount of time over the past 10 years.

What has changed, as shown in the red (data from the mobile app ‘Moment’), is how much time we spend looking at screens. It used to be only minutes in 2007, but now our phones, laptops and tablet usage is taking up the majority of our free time, and dramatically cutting into our social and leisure time, much like TV had previously done in the second half of the 20th century.

Unlike TV, this has not been by accident, with the smartest minds of today often focusing on how to attract and sustain our attention on their games, their sites and their apps. This is all brilliantly explored by Alter in his recent book ‘Irresistible’, which I put in my top 20 countdown of my favourite books of the last five years.

A 2017 review by Brendan Meagher on the Australian Psychological Society Website introduced me to the term ‘problematic mobile phone use’. This is “an inability to regulate one’s use of the mobile phone, which has negative consequences in daily life” (Billieux, 2012).

Australia is now fourth in the world in terms of smartphone usage. 84% of us have a mobile phone, with 85% of teenagers and young adults exceeding 2 hours of screen use on their phones every day. The average for all Australian mobile phone users is 2.5 hours a day, which adds up to 38 days per year. We check something on our phone 30 separate times each day, and 45% of Australians now say that they couldn’t live without their phones (Meagher, 2017). Possibly the scariest statistic is that 42% of Australians over 18 still use their phones while driving, despite this being linked with a much higher risk of car accidents (Rumschlag, 2015).

Consequences of Excessive Mobile Phone Use

Mobile phone overuse can be likened to an addiction, with similar symptoms to substance use problems, including tolerance, withdrawal, and daily-life disturbance (Kwon et al., 2013).

It can also negatively impact relationships, lead to fewer social interactions across a week, and impair academic performance (Kuss & Griffiths, 2011).

Is Your Mobile Phone Use Problematic?

If you are unsure, Meagre recommends considering the following questions:

Could You Cut Down Your Screen Time?

If you answered yes to any of the above questions like I did, then you may benefit from tracking your usage and seeing how much time you actually do spend on your phone actively doing something.

I bought the full version of the app ‘Moment’, as recommended by Adam Alter. For the first week, I didn’t try to change how much I used my phone to get an accurate baseline. My average was 1 hour, 48 minutes of screen time a day. Less than the national average, but still not how I really wanted to spend my spare time.

I then took on the ‘Bored and Brilliant Challenge’ on the ‘Moment’ app for the following week and set myself the goal of less than 1 hour of screen time each day.

The ‘Bored and Brilliant Challenge’ was first developed by Manoush Zomorodi after she realised just how long it had been since she had last felt bored, thanks to always being able to look at her phone whenever she had a spare second. She also realised that without this time of boredom, she had very little time to let her mind just wander, which was often when she had her best creative ideas. She then decided to set a challenge on her podcast for her listeners, which became the focus of her subsequent book of the same title.

As the above-left data shows, I managed to pick up my phone three times less per day. My baseline of 21 times per day was 9 less than the average Australian already, but I’m glad that I was able to reduce it further to 18 times per day.

The picture on the left indicates an opening of 4 hours and 26 minutes across the week for me, with a new average of only 70 minutes per day. Not quite at my 60 minutes per day maximum goal yet, but well on the way.

As shown in the data above on the right, the average person who takes on the ‘Bored and Brilliant Challenge’ creates 58 minutes more free time each day by cutting down their phone usage. It would be great to know how they used their spare time instead.

Other Suggestions for Cutting Down Screen Time

Hopefully, with everything discussed here, you can now see the potential pitfalls associated with excessive use of technological devices, especially those involving bright screens.

If you are feeling rushed, always complaining about being busy, spending too much time on your phone, or wanting to find more time for social and leisure activities, I encourage you to seriously consider the role that technology plays in your life. If there is an area where it is becoming problematic or causing you distress, I recommend implementing any of the above suggestions or challenges to see what difference it can make in your life.

If your screen usage is an unhealthy habit that feels too strong to change by yourself, a session with a Clinical Psychologist who is experienced in treating addictions could provide additional assistance and support.

41 thoughts on “Is Your Screen Time Eating Up Your Free Time?”