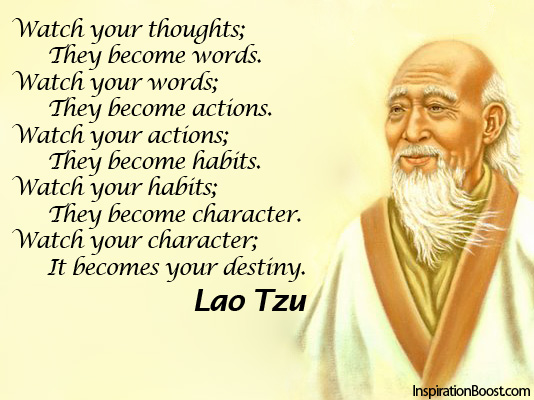 I love the above quote by Lao Tzu. It really highlights to me that all of the little choices we make in life are important, especially in the long run.

Not any one choice, or any particular action, unless it is unusually severe or unforgivable. I’m talking about the little things that we do on a regular basis which cumulatively build up over time and define the type of person that we are, and who others see us as.

This may be something like choosing to make your bed every morning or getting up to go the gym before work or having a veggie smoothie rather than a jam-filled doughnut and caramel macchiato for your 3pm work snack. Taking the easy or not so healthy option may not seem like such a big deal if it’s just the once, but what if this then becomes habitual over time?

Without even realising it, you may wake up one day and recognise that you have a severe sugar, junk food, caffeine, nicotine, alcohol, TV or smartphone dependency, and it’s no longer as easy to stop this behaviour as you may have hoped for or believed.

Most obese, unfit and unhealthy individuals probably didn’t expect that they would be where they are, but it didn’t just happen overnight either. They started with an initial thought, felt something, experienced an urge or craving, and made a choice to act in a certain way. The more they repeated this action in similar situations, the more the brain learnt that this is just what they needed and that this behaviour should be repeated whenever they thought or felt this way.  Eventually, the action no longer felt like a choice, but a compulsion, where they may not have even realised what it was they were doing until it was too late, let alone be able to change it going forward.

William James said something similar, but offers a solution out of this trap:

I’m not sure if I agree with William James completely, because in my experience it is often easier to act ourselves into new ways of thinking, rather than think ourselves into new ways of acting. While how we think and feel about things is important, if we don’t also challenge and change our behaviour, it is going to be very difficult to make any type of positive long-term change. Change our behaviours first regardless of our thinking, however, and we will have more and more evidence that is contrary to the unhelpful thoughts or beliefs that we hold. In time, it then becomes more comfortable to shift these negative thoughts and perceptions, shaping your reality.

Why Bother Trying to Change?

Someone asked me the other day “will you ever just be satisfied with how you are, and eventually stop using questionnaires and other measures to keep trying to track and change your life?”

It seemed like a weird question to me, but it is consistent with how my father tends to view life too. He knows what makes him happy in life, and does it. He’s not too worried about changing or growing and just focuses on enjoying each day, even if it’s the same as yesterday.

That’s great for him, and on some level, it would be nice, but I just don’t think I’m built that way. Maybe it was because I was a pretty stressed out, anxious and sometimes unhappy child. Or perhaps I have seen how much I’ve been able to improve my life and my relationships with others through learning about psychology, reading a lot, going to therapy, making specific behavioural changes, and continuing to monitor and challenge myself over time.

A quote by Charles Bukowski probably sums it up better than I ever could:

We’re meant to do at least 4 hours of moderately vigorous physical activity each week according to the Centers for Disease Control and Prevention, and yet researchers have found that the average American adult only does 17 minutes each day.

According to the 2017 OECD findings, more than 50% of adults and nearly one-in-six children are overweight or obese and this figure is projected to increase further by the year 2030.

The World Health Organisation says that 3 million people died worldwide in 2016 as a result of harmful alcohol use in 2016. Fortunately, the drinking of alcohol has continued to decrease in Australia since its peak in 1974-1975. However, regular teen consumption of alcohol is still the most significant risk factor for problematic drinking of alcohol in adulthood.

In 2014 in the US, 6.2 million people were reported to suffer from an illicit substance use disorder, and more than 115 people die every day from opioid abuse or misuse.

The average American household was watching 8 hours and 55 minutes of TV a day in 2009-2010 (the peak), but this has only dropped down to 7 hours and 50 minutes per household in 2018, which is still an extremely high amount. Viewing time per household increased every decade since the 1950s, and now seems to be the thing that Americans do for leisure, as was brilliantly documented in Robert Putnam’s sociological book “Bowling Alone”.

59% of all Americans and (48% of Europeans) now play video games, including 97% of teenagers in the US. A 2016 study found that 6% of gamers worldwide could be considered to be addicted, and another study found that 7% were problematic gamers, who played at least 30 hours each week.

Lastly, smart-phone usage continues to increase around the world, with excessive social media and smartphone usage also being linked to adverse mental health outcomes. As I’ve previously mentioned in another blog post, Australia is now fourth in the world regarding smartphone usage. The average for all Australian mobile phone users is 2.5 hours a day, which adds up to 38 days per year. We check something on our phone 30 separate times each day, and 45% of Australians now say that they couldn’t live without their phones.

Putting all of these statistics together, it’s pretty easy to see the long-term consequences of our brains wanting to conserve energy, take the easy option, or avoid pain. These little, seemingly insignificant moments probably happen at least 20 times a day, and in each moment, as long as we are paying attention, we have a choice. We can stay on autopilot and do what is easy, or we can tune into our core values, ask ourselves what type of person we would like to become in the long-run, and then take the action that is consistent with this vision, even if it feels strange or different or outright uncomfortable.

Going to the gym will always hurt the first time you go, but the 20 minute walk that you choose to do today is better than the 10km run that you put off until next week. It may be tempting to say that you’ll start a new diet next Monday, but why put off making a healthy decision in the here-and-now if you don’t have to? It is these moments that will eventually define who you become, and you can begin to make a positive long-term change today…

But What Do We Do if We Want to Change?

So let me ask you the following three questions:

If you answered YES to either question 1 or 2, and you don’t know the answer to number 3, it is worth exploring deeper…

It is worth finding out what makes you tick. It is worth finding out what your values are, what your personality is like, what your strengths are, and maybe even your attachment style. Change is possible…and inevitable. You just have to know what steps to take. Here are 25 ideas that could change your life, and 20 of my favourite quotes to motivate and inspire you to take action. I wish you the best of luck on your journey of self-discovery and growth. Like me, I doubt that you will regret it.

12 thoughts on “Do the Little Things We Do Matter?”